Between my 5K PR, third place age group win, and the USA Outdoors Track and Field Championships, I’ve had speed on my mind. Now I know I’ll never be able to run an 800 as fast as Kate Grace, her nickname is fast Kate after all, I can’t help but feel inspired by the incredible strength and speed of the runners at Nationals.

In my time off between training cycles, I’ve made a habit of doing at least one speed workout every week. I’ve been going to intervals on the track at work every Wednesday and then I try to make one of my other weekday runs a progression run.

After reading Lora’s post about her coach recommending she buy racing flats, I started thinking, maybe that’s what I need. Last weekend I went to my local running store, Aardvark Sports Shop, to “just look” at what they had. After talking with the owner, he picked out some for me to take some test runs in. But the minute I put my feet into the Saucony Fastwitch 6 I knew they were the ones. They felt like an extension of my own feet and when I went running in them I swear I already felt faster.

If you’re thinking about getting your own pair of racing flats here are 7 reasons that may sway you: 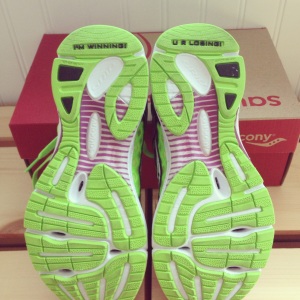 I haven’t run in them yet (besides the test run at the store) but I think I’m mostly going to use them on the track and maybe for racing short distances. As I look toward the beginning of Marine Corps training I’m planning on taking note in my log of what shoes I wore with what workout. I didn’t do this with Big Sur but I think it’ll be beneficial to keep track. I can’t wait to try out my new flats this week, you can be sure I’ll write a follow up post.

Do you run in flats for speedwork or races? If so, what’s your go-to pair?

25 thoughts on “7 Reasons to Get Racing Flats”