My mom always told me, “If you think you look good, you’ll feel good.” I think this totally applies to running. If you look good, you’ll run well. I’m not ashamed to admit I put ok, a lot, of thought into what I wear on my runs every day. If my outfit is some old race t-shirt and those fluffy Nike running shorts from high school (you all know which kind I’m talking about) then I might not feel as good on my run. But if I have on some bright colors and a well-coordinated outfit, I usually feel fantastic. This might sound shallow to some people who just wear whatever is on top in their drawer but whatever, that’s your prerogative.

Lately though, I’ve noticed some followers on Instagram asking where a certain pair of shorts were from or what shoes I was wearing, so I decided, why not share this with you all? I’m trying to get #RUNootd (Run outfit of the day) going on Instagram/Twitter. This might already be a thing (is it? I don’t know) but I think it would be fun to share our running outfits. So, to kick off my first #RUNootd, I bring you this outfit I wore today. 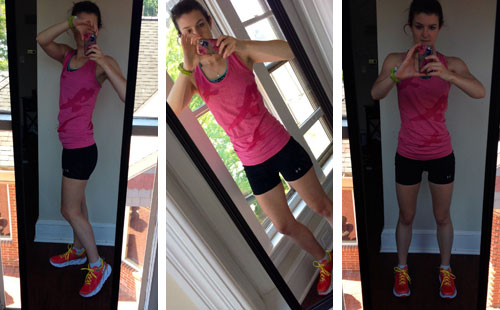 Shoes: Hoka One One Clifton (sorry, these don’t hit retailers until Fall 2014!)

Some comments on this #RUNootd:

I’m going to try to make this whole #RUNootd thing an actual thing so it would be awesome if y’all joined in. Share your #RUNootd on instagram, tag me even if you want me to see (@HannahMcGold), and let’s share our awesome running outfits!

I feel like I’ve been thinking about a fall marathon since January. Actually, I know I have. It’s always funny to me that after finishing one race, I immediately start thinking about the next. It happened to me when I crossed the finish at my first marathon at Big Sur last year and it happened to me after Marine Corps in October.

But I needed a mental break from marathon training. I wanted to take the spring off to try to get faster by running half marathons and shorter distances. My plan almost worked and I definitely got faster, but more than that, my mental vacation was just what I needed to get excited about training for a marathon again. And, man, am I excited for Chicago!

Now, here I am, with about a month to go before training starts and I’m already setting my goals. It might seem a bit early but most of my goals for Chicago are more “habit changers” than race goals. I won’t really know my race goals until closer to October 12, but I do know there are some changes I want to make to the way I train this time around that need to be set in place before training even begins.

What kind of goals do you like to set for marathon training? Tell me about ’em in the comments below! 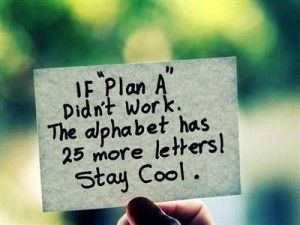 I used to pride myself on having a high tolerance for pain. I’ve been lucky to have only a few minor running injuries in the two years since I started, like IT Band Syndrome, Runner’s Knee, some possible Plantar, but nothing major.

That is until three weeks ago when I started having chest pains 8 miles into my spring goal race. The pains passed, I was able to finish the race, but I missed my goal of setting a PR and none of my runs have felt the same since. My easy runs have felt harder than they should, and my race pace runs have felt really tough – I’ve been walking, a lot.

I would be kidding myself if I said I was in shape to hit my goal PR this weekend at the Brooklyn Half Marathon. I’d also be kidding myself if I said I wasn’t scared those chest pains would return mid-race. The truth of the matter is I’ve been really disappointed in my running since the race three weeks ago and honestly I’ve lost some of that confidence I gained over the past few months of training.

I’m not 100 percent and I know if I decided to race at Brooklyn this weekend, my heart wouldn’t truly be in it (no pun intended). So I’m not going to run. It sucks. A part of me thinks taking the DNS (did not start) is the easy way out but a bigger part of me knows this is the smart decision, both physically and mentally.

I have a doctor’s appointment scheduled so I can figure out what’s up and hopefully get the all clear. I’m just going to take this time to refocus, try to get healthy, and regain some of that running confidence in time to start training for my fall goal – The Chicago Marathon.

Have you ever taken a DNS for a race? How did you deal with it?

In running, and life, there’s usually not a one-size-fits-all way to do things. One training plan that helped someone get a BQ won’t necessarily do the same for you. You have to make you own path to reach your goals because after all, no one knows you better than yourself. Happy running this week! 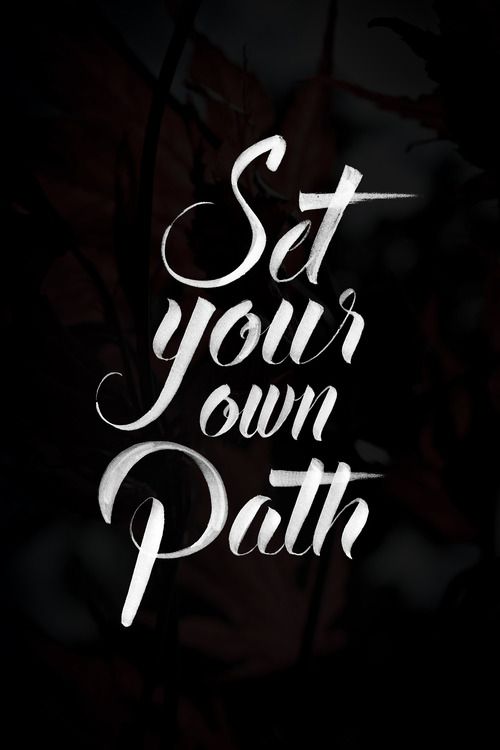 Yesterday, I was nearing the end of my final tempo mile along a busy-ish road near work when all of a sudden a massive tractor-trailer honked his horn at me… four times.

I was so startled from the noise of the honking, and the fact that I was in the middle of a very fast-for-me mile, that I stopped dead in my tracks. Instead of catching my breathe and calming down, I turned to the truck and flipped him the bird with not one, but both of my hands.

I know, bad behavior shouldn’t illicit more bad behavior but I’ve had enough. And I’m not the only one. This week alone, I have been honked at five times during a run by guys driving by. Scores of women runners, of all shapes and sizes, have had moments like this. You’re running along, minding your own business, when a dude driving by beeps his horn at you, and whistles out his window, or says some other obscenities.

It happens to me almost every time I go for a run by myself. It happens when I go out running with a friend. It even happened once when I was doing a hill workout with my boyfriend who was about a half-mile ahead of me. No matter the time of day, year, or what I’m wearing I get beeped or cat called at.

A writer over at Competitor wrote a story about this today, which prompted me to write my own. Another writer friend wrote a post about it for Philly.com and told me that after she published her piece she actually got HATE emails from men (and women too!) defending these actions. What the hell, people?

Besides it being annoying and interrupting my otherwise killer tempo run, I wondered, what did that disgusting trucker think he was going to get out of that? He wasn’t turning me on. I wasn’t flattered. I was pissed off.

Like the author of the Competitor piece, all I wanted to do was get my tempo miles done, cool down, and go back to the office for lunch. Instead my run was interrupted because some trucker decided I looked good enough during my run to honk at. Unfortunately, I don’t have a solution for the problem, and I don’t have much faith in the changing the men who tend to cat call, but we need to make it clear that it’s not a compliment and it’s not OK. 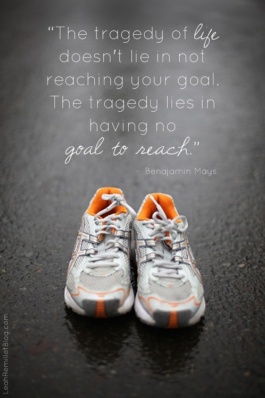 This winter/spring my focus was to train to run a half marathon PR. The PR didn’t happen (yet) because of a weird fluke but I have another half coming up next weekend. I’ve never really trained hard for a half (besides the first one I ever ran) but my main reason for training with a time goal in mind was to help capitalize on some of the speed I’ve been developing. I figured, if I try to train for a maybe-just-out-of-reach time goal, it will force me to get faster.

Well, I have definitely been getting faster but it hasn’t been easy – and it shouldn’t. I’ve learned a lot so far and I’m sure I’ll continue to learn more but I thought I would share a few of my lessons here.

Do you have any tips to add to this list? Let me know!