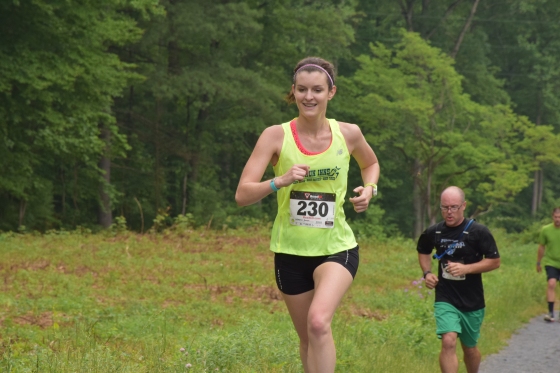 Last week was a week of running firsts.

I ran my first trail race, first track race, and first mile race. (The track and mile first were the same race, obvi.)

I tend to be very conservative in my goal setting. Setting a much-too-lofty goal increases the risk of failure. But setting a goal too shallow can leave you wondering what could have been.

I had two goals for these races. For the trail race, there was a 5-mile and 10-mile option. I registered for the 5-mile because I thought it would be a good starting point for a trail race. I knew the race was going to be much slower than my regular 5-mile time (which took some getting used to) but I chose to not look at my watch and just run by feel. I also wanted to finish the race not hating trails.

The race turned out to be a really fun adventure. I say adventure because: 1. I had no idea where I was going most of the time, 2. It was beautiful, and 3. I came in third female overall, which was fun!

More than anything I was happy to finish the trail race not hating racing on trails which was my ultimate goal.

Just five days later I had another race on tap—a mile on the track, a.k.a. the exact opposite of a trail race. This was going to be the first time I’ve ever raced a mile (in fact my first all-out mile effort ever) and my first time racing on a track. To say I was nervous heading into the race would be the understatement of the year. I think all of my coworkers at Runner’s World were absolutely sick of hearing my angsting all week leading up to the race. (Sorry!)

The angst didn’t stop until the gun went off on Friday evening. Luckily, I work with some pretty experienced runners who helped answer all of my questions like: how should I fuel for a nighttime race? How do I pass on a track? How should I pace each lap? Will I poop myself? So, going into the race I felt pretty confident with all the knowledge I had picked up over the week but that didn’t make me any less nervous.

I raced in an open heat that was comprised of all abilities, ages, and both male and female runners. My goal was to run a 6:40 mile so I knew if I could manage even splits of 1:40 per quarter, I’d be set.

I went out too fast in the first quarter, which was to be expected and ran a 1:35. I reined it in a bit for the second quarter and ran about a 1:37ish. I don’t really remember the third quarter (also to be expected) and before I knew it I was on the fourth quarter with the single goal to catch the girl a few steps ahead of me. I caught her on the final straightaway and crossed the line in 6:40 on the nose.*

I was pretty pleased with my time because I hit the goal I set at the start but I don’t think 10 minutes passed before I started analyzing my race and feeling like I could have run much faster.

Luckily, the mile races are part of a series this summer in the Lehigh Valley so now that I have a baseline I can refocus for next time.

So trail race vs. track race? I’d choose track. While the trail race was relaxed and a great community event, I liked the speed of the track and the excitement (OK, nerves) leading up to it. Since I’ve started focusing on shorter distances I’ve become a bigger fan of speed over distance. I like challenging myself to get faster and it’s just so different from distance. Plus, sometimes different is better!

*All of my splits and finish time were based off of my watch. My chip time got messed up so the race website was a little off my actual finish time.

5 thoughts on “A Week of Running Firsts”