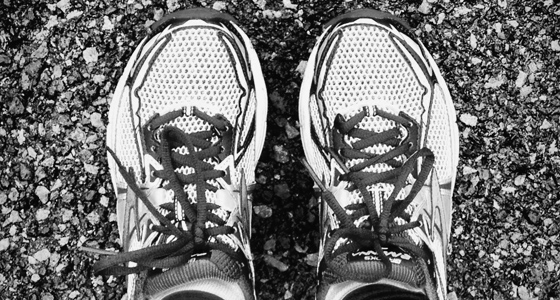 Ten weeks ago, I downloaded my first-timers marathon training plan and entered my weekly mileage goals into my calendar- both on my computer and on paper. I like having it down on paper so I can physically cross it out once it’s done and feel like I really accomplished something.

As I entered the workouts and mileage onto my calendar, one number stopped me- 20 miles. That’s like, really far, I thought. But at that time, back in January, I had every right to be intimidated by this number. The most I had ever run was 14 miles so I had no business thinking about 20 miles yet. Also, it seemed so far away at that point, it just felt out of reach.

But then last week as I was staring down my Saturday long run, I knew it was time. I had built up to 18-mile long runs, done them twice, so I was ready for 20, theoretically. After all, it’s only 2 more miles, right? I asked around my office for advice, how do you make it through, are there any tricks, can I split it up? The answers were all helpful but it didn’t do much to calm my nerves.

On Friday, with my midweek runs crossed out, I had two more workouts left- the 20-miler and a shakeout. At that point I still couldn’t really fathom actually running 20 miles. But I did what I always do for long runs. I set out my clothes on the floor, picked out my socks, tights, shirt, windbreaker, and shoes. I laid out my Gu packets- two vanilla bean and one mocha- I placed my handheld water bottle next to my gear, and got my headphones ready to go. My Garmin would charge overnight, my breakfast was planned and alarm set. I was prepared.

I woke up Saturday morning to sunny, blue skies and I actually felt calm, ready and even excited. Before heading out I logged into the Runner’s World Challenge forums to check to see if anyone had any extra advice. One Challenger, Mark, suggested I not think of the run as a 20-mile run but rather four 5-mile runs strung together.

“Five miles is easy,” he wrote. “You’ve done it many times.”

So I set out for my four 5-mile runs, at least that’s how I was thinking about it, and the time flew. I honestly couldn’t tell you what I thought about during the whole run but before I knew it, 3 hours and 6 minutes later, I was back at my apartment doorstep, beaming from an excellent run.  I was in utter bliss.

After showering, stretching and eating, I went to a friend’s house for a BBQ. One friend asked me how my run went and then said running 20 miles would be a form of torture for her.

Valid point, I thought but it got me wondering, as distance runners, why do we do what we do? Why do we voluntarily spend three hours on a Saturday morning, alone or with a group, running miles most people won’t drive in a single day? Why do we put up with the injuries, time spent away from friends and family, hours spent training, for something we’re neither forced nor required to do? Every runner has a different reason for training for a certain race distance. Some runners start training for their first 5-K to lose weight. Others are pushing themselves running tempos and intervals after working full-time day jobs to try to snatch the illustrious and prestigious BQ (Boston qualifying time). Where other runners just run to run, not for any particular goal or race but just because they enjoy it.

For me, running started off as a way to prove something to myself. To prove if I worked hard enough I could achieve the (seemingly) impossible. But now it’s evolved into something so much bigger. It’s runs like my first 20-miler last weekend that remind me why I fell in love with running a year ago. It’s hard to explain but the love for running is a bond all distance runners share, at least I like to think so.

All I know is, I came home from my run and went right to my calendar and with a black ink pen, I crossed off my first 20-miler. Now that, was bliss.

Leave a Reply to Ja @Athlete Within Ja Cancel reply