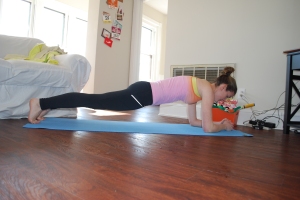 No one can argue a strong core isn’t good for your overall health and fitness, but did you know having a strong core is especially good for runners? I have been slacking over the past couple of months with my core exercises but in the past few weeks I’ve really ramped it back up.

In my weekly training recaps I write about doing plank exercises and one reader asked me what are the best planks for runners? Well, truth is there are so many variations of planks and I try to do as many as I can but I’m no expert so I thought I’d reach out to the creator of the #plankaday trend that hit the Twitter-sphere and Interwebs by storm beginning in June 2011. Now, 7,000 plankers strong, what started out as an accountability exercise between Dr. Sherry Pagoto, a licensed clinical psychologist and associate professor at the University of Massachusetts Medical School, and her longtime friend Mike Bauman. The two used the hashtag #plankaday to keep each other consistent and pretty soon their followers caught on.

“Because I am a behavioral scientist with an expertise in health and weight loss, I was fascinated by how Twitter facilitated such engagement in an exercise, so I began to study it scientifically,” Dr. Pagoto said. Her study will be published in the Journal of Physical Activity and Health in the near future.

I first caught on to the plank a day craze this past summer. At the time I was more focused on being able to hold a plank for as long as possible (4:02 PR!) but when I stopped being so consistent, I really lost my plank endurance. Turns out however, duration of planking might not be so important for runners. I wanted to find out more about how planking helps runners specifically so Dr. Pagoto referred me to her sister, Julie Mulcahy, MPT, who is a physical therapist and runner.

What benefits will runners see from doing a plank a day?

Runners will see many benefits from adding planks to their strengthening routine. Planks strengthen core muscles, which include the spine, hip, and abdominal muscles. I use the analogy of building a house to teach the importance of a strong core. If you build a strong house with all the finest materials, but build it on a weak foundation, it will not be stable and may come crashing down. Your core is your body’s foundation. With a strong foundation the arms and legs can function from a stable base and can provide more power.

Should runners do different plank variations?

I always recommend variations of exercise for most efficient training. Doing the same static plank day after day will eventually lead to training plateaus. Dynamic planks are the best for runners. During running, the core must stabilize as one foot is on the ground and the other is in the air during the swing phase of running. There are many ways to train your core with planks for this phase of the running pattern. Performing planks with alternating leg lifts or mountain climber planks are two examples. Here is a video where I demonstrate a few variations: http://www.fudiet.com/2011/10/the-joy-of-planking-adding-variation-to-your-plank-life/ 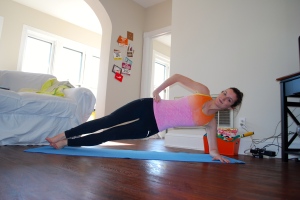 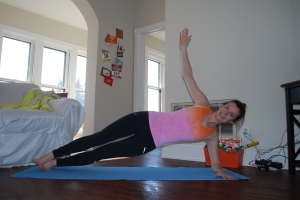 Side plank with raised arm 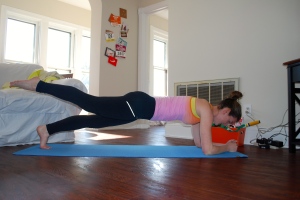 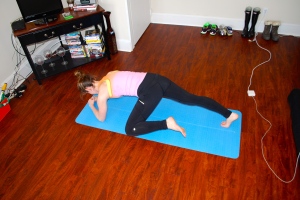 What is the benefit of being able to hold a plank for a long period of time? Do you get the same benefits from holding for less time but doing more planks?

The hold time for planks is very subjective depending on the person. Start with an amount of time that you can successfully hold your form perfectly. You may add multiple sets of planks at this same hold time. Performing multiple sets of shorter duration planks are preferred over one very long duration plank. Anytime you are strengthening your core, quality is preferred over duration and quantity. When you are able to hold a minute, start trying dynamic movements. Remember to include prone  (stomach facing the floor) and side lying positions. Holding very long durations, possibly over 5 minutes, is a test of your ability to tolerate significant discomfort and endurance, however not entirely functional for running. During running the core doesn’t need to generate and maintain such an intense force for durations of that length of time.
Should runners supplement planks with any other kind of abdominal exercises as well?

For my running clients, I combine other abdominal exercises in various positions that facilitate core stabilization and balance, in addition to planks.  Using weighted medicine balls, tubing and pulleys in standing and semi reclined, pelvic neutral positions can also train core effectively for runners and can be a great complement to planks in an overall core strengthening routine.

Some people say doing planks hurts their shoulders, is there any way to alleviate this but still reap the benefits of planks?

Another great benefit of planks is that they build upper body strength. However if a shoulder, elbow or wrist problem is present, planking can be difficult. To alleviate wrist pain from the extension and pressure from a plank, place two dumbbells on the floor and hold onto them instead of placing wrist directly on the floor. When planking with bent elbows, place a pad under elbows to alleviate pressure.  For anyone with shoulder pain, attempt planking with hands on floor and elbows straight. This helps distribute some of the force through more of the upper extremities. However, there are occasions when certain upper extremity conditions cannot tolerate the weight bearing required of planks and other types of core strengthening can be recommended. Always consult a health care professional based on your individual case.