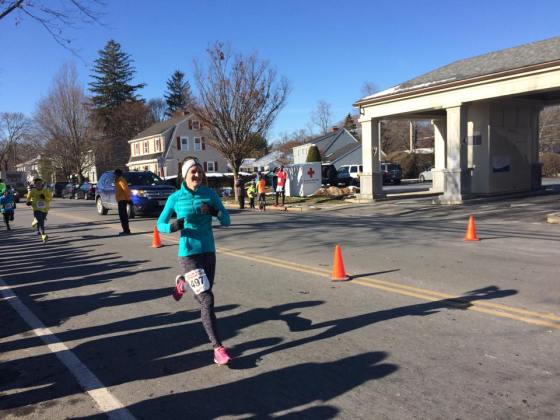 Photo from Shalane Flanagan’s Back the Track 5K where I ran another 23:02.

The other day I went on a lunch run. I didn’t have an agenda. I thought I’d go out for a 5-ish-mile easy run.

During the first mile I settled in to an 8:30/mile pace. Lately, this has been my natural “easy” pace. (In truth, it’s probably a little faster than I should be running on easy days but it feels comfortable.) The route I decided to run was an out-and-back and was rather uneventful until mile four clicked off and I looked down at my watch and saw 7:57/mile.

I don’t typically run 7:xx/mile during an easy run and I most definitely don’t run it comfortably. At least that’s been the case until this lunch run. I felt totally comfortable and didn’t notice a change in effort or breathing. Then my fifth mile clicked off and my watch read 7:47.

So what’s the deal?

About a month ago I posted about how I wanted to focus on speed for the winter. I decided to hone in on training for 5Ks because I think it’s a manageable goal, especially once the weather gets really bad. To work on this I’ve been incorporating more speed work into my training week. I’ve been running at least one tempo and one interval run each week and now I’m starting to see the impact.

My only problem is I have no idea how to actually “train” for a fast 5K. Sure, when I started running I did a couch-to-5K program. I ran my first 5K in 28:07 in September of 2012 but then I immediately began climbing the race distance ladder instead of working on speed.

I had never really raced a 5K until a month ago when I decided to test my fitness to see where I should start. I ran a 23:02, a nearly 2-minute PR since my previous 5K. After that I decided my first goal should be to break 23:00 but then my next goal should be… I don’t know?

If I’m running high 7:xx/mile pace at the end of an easy run, I don’t know what a more realistic 5K goal should be. Maybe a 21:xx? All I know is I like this newfound speed and I like the challenge running fast presents to me. Sure running long is fun too but right now, at the risk of sounding super corny, I’ve got the need for speed.

I’m welcome to any suggestions about what you might think would be a good 5K time goal. Share your thoughts in the comments! :)