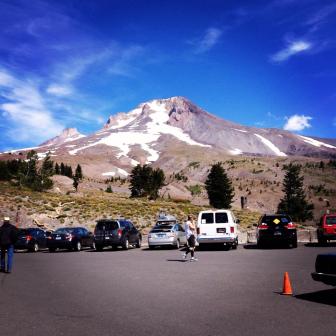 For the past week (and the entire plane ride home from the Pacific Northwest) I’ve been trying to brainstorm the perfect lead for my Hood to Coast recap… to no avail. Seriously guys, I’m a writer, I’m supposed to be good at this whole wordsmithing thing but words are failing me right now.

I’ve had plenty of chances to explain to friends, family, coworkers, and random passersby, just how amazing my experience running Hood to Coast with Nuun was since returning to the East coast.

To which I have responded, “It was absolutely, incredibly awesome!” And that’s pretty much the most concise way I can sum up Hood to Coast. Absolutely. Incredibly. Awesome.

I think my mom was the only one willing to hear my minute-by-minute recap of Hood to Coast, because, well, she’s my mom and doesn’t really have a choice. So, instead of boring you here with an infinitely long, rambling train-of-thought recap, I thought, instead I’d write about what I actually learned at Hood to Coast during my three legs as runner four.

Kara handing off to me during our first leg.

When we were asked which leg we wanted to run back in April, I told Megan at Nuun that I was probably a much slower, less experienced runner than most of the women I’d be running with. I told Megan, “I’m fine with long distance but when it comes to speed, I may not be your girl.” I checked out the legs but really didn’t know what I was looking at so I gave her my three choices, runner four being one of them. Runner four runs a total of 15.16 miles with two runs classified as “easy” and one as “medium” – compared to the other legs, runner four has it “relatively” easy.

We also provided our 10K PRs which would be used to predict our finishing times for each leg. Having run only one 10K in my life, not racing at all (I had to run 18 miles the next day), my PR was less than fantastic. I knew I could run faster than the times HTC predicted for me but that’s when my self-doubt set in. Instead, I decided to take a back seat and see what happened when I got out on the course.

Well this was a surprise. When Kara handed off to me at exchange four I was full of energy but I was nervous. I knew I’d run faster than 9:51/mile with a slightly gradual downhill, but I never would have imagined I’d run this fast. It’s very rare that I ever see a mile split with a “7” in the front, let along 7 miles with 7’s in the front. I remember looking down at my Garmin after the first mile and seeing 7:45/mile and being completely shocked, scared almost. But I remembered the advice Dorothy Beal gave me ahead of time, “Don’t be afraid of the pace. You are that fast.” So I decided to take her word for it and settle in for the ride. My next mile was 7:36/mile- ok, getting faster I thought, but I blamed it on the slight downhill. After half-way through the leg the road flattened out a bit and when I maintained my sub-8:00 pace on the flat ground, I realized I REALLY WAS RUNNING THAT FAST! I felt incredible as I went zooming down the road literally flying past other runners (I had 15 roadkills on that run alone). Before I knew it my first leg was done and I came racing into the exchange schute a full 13 minutes faster than predicted! Oh yeah, and I snagged a new 10K PR on this run!

After my first leg- all sweaty, all smiles.

I was still riding the high from my first leg when it was soon time for me to run again. My second leg would be pancake flat but in the middle of the night, 1:00 a.m. to be exact. I had never run at night, or in the dark, before so I was pretty nervous going into the run. But I sucked it up, put on the reflective vest and waited for Kara to come into the exchange. It was so dark on the majority of this run that I had a tough time seeing, but I sure felt like I was going fast. The entire run was one the shoulder of a highway and there weren’t many runners around me during the majority of the run. One runner came up behind me though and he seemed to be going at a pretty decently fast pace. He passed me with ease but I decided to keep him in sight. I couldn’t see my watch so I wasn’t sure how fast I was actually going but at one point I thought I saw some kind of animal in a field so I really picked it up. Before I knew it I could see the exchange out ahead of me, and the guy who passed me was still in sight- well within passing range- so I decided to kick it in to the shute to pass him. With about 200 yards to go I managed to pass him wearing my sparkly skirt! There is nothing better than passing a dude in a singlet while you’re wearing a sparkly skirt. It felt so exhilarating!

I knew by the time my third leg rolled around my legs would be zonked. I was expecting to be much closer to my predicted finishing time on the third leg, especially since this one would be in broad daylight with the sun beating down, uphill, and with a cruel camber in the road for the last half. Going into this run I wasn’t feeling great. A few of us had a not-so-great dinner the night before that led to a few code browns throughout the night and morning. I was nervous it was going to happen to me because my stomach wasn’t agreeing with me. I thought, it’s my final leg, if I just give it all I have left, which will be enough. Plus, I was really excited to be running my last leg, I didn’t want it to be painful!

But it started out pretty painful. I got the slap bracelet at the handoff from Kara and leaped out of the exchange with as much energy as I had during my first and second legs. I got about 1 mile before my stomach put the breaks on my zealous approach. But just then, just when I thought, “Maybe I should just walk a little bit… Maybe I’ll feel better if I did that…” I hear a van coming up behind me. Van 2 of Team Watermelon came to my rescue blasting Taylor Swift and pulling up just in time to give me a power arch! This was absolutely incredible and it was just the kick I needed to kick myself into gear and get running.

I started passing people like it was my freakin’ job! There was traffic leading up to the exchange and I kept passing this one van, the Lightning Mullets, basically a van-full of guys my age cheering me on. But when I got less than a half-mile out from the exchange, they pulled up again, opened the van door and said, “We’ve got actual Mardi Gras beads for you! Catch them in 1…2…3!” And I caught them, through them around my neck and came racing into the final exchange. It was so epic!

Throwing up a power arch for Sarah on her last leg!

I also learned at HTC that it is much easier to believe in yourself when you are surrounded by people who believe in you. My HTC team was absolutely amazing and so incredibly supportive. We gave each other support from beginning to end, through code browns to tattoo applications, on hills and downhills. We were there for each other and the connection we made was one of true friendship and support. 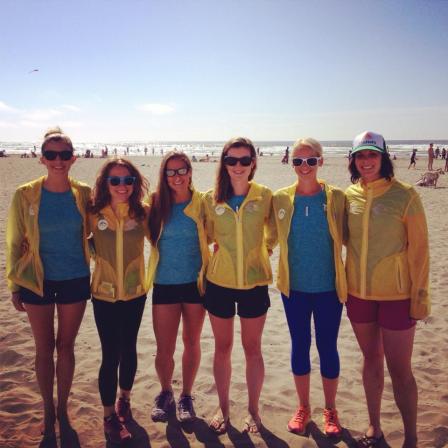 We made it to Seaside!

From this I’ve got to segway into the incredible amount of girl power I felt throughout the entire journey of Hood to Coast. There were 36 of us ladies running for Nuun and from our Sparkly Skirts to our kickass paces, there was no shortage of team spirit. And seriously, what is better than passing guys when you’re wearing a sparkly skirt? Nothing!