A few weeks ago I started noticing a very active Twitter handle pop up on my Twitter feed. It was from a Boston-based company called ENERGYbits and they were tweeting back and forth with a lot of the runners and bloggers that I followed and before I knew it they were following me as well. They asked me if I would be interested in sampling their product and writing a review, and based on reviews and comments I heard from other runners I thought, “For sure!”

Turns out one of the brand managers is actually a fellow UMass Amherst alum so I knew it was a good idea! According to their website, ENERGYbits are natural algae tabs that are designed to boost endurance, energy and enhance health. As a runner, I thought these bits could be a great way to fuel before a run, especially a long run, to keep me going until the final mile.

ENERGYbits are made of 100 percent organically grown spirulina algae. Now when we think algae we think of that nasty stuff that floats to the top of ponds and lakes during the summer, but it turns out that nasty stuff has some amazing health benefits. At just one calorie per tab, the spirulina in ENERGYbits has the highest concentration of protein in the world- three times the amount in steak. These tiny little bits also contain 40 vitamins and minerals, Omega-3s and 64 percent protein. 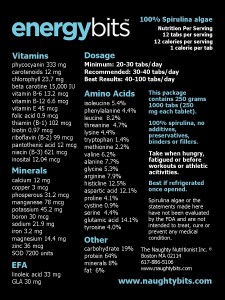 I decided to try ENERGYbits before my long run two weeks ago to see if they really did help me with endurance and energy. I set out for a long and slow 8-mile loop through nearby neighborhoods. Before heading out I took the recommended dosage of 30 ENERGYbit tabs. You’re probably thinking, 30?? That’s an insane amount of tabs! But really it wasn’t that bad. The tabs are so tiny and easy to swallow, you won’t even notice there are so many. However, one word of caution- they do not smell good and they taste even worse. The people at ENERGYbits suggest you swallow the tabs with a liquid as opposed to chew them as they are an acquired taste. But who chews vitamins anyways? I took them with some juice and could barely taste them.

Once I was good to go for my run I set out the door with my Runmeter tracking my run and waited for the results. I didn’t notice a huge difference in my running but I felt very comfortable and energized, but not in that jacked-up caffeine-high kind of way. I just felt very awake, which was great considering it was 7 a.m. on a Saturday morning. The real dealbreaker was at the end of my run when I checked my Runmeter to see I ran 8 miles in 1:05. What. That was an 8:08 average pace. Insanity!?

I can’t say for sure ENERGYbits caused me to run like the wind but they must have done something right because I’ve never run a long run that fast in my life. Moral of the story? If you’re looking to boost energy and endurance in a natural way be sure to check out ENERGYbits. They worked for me and have worked for countless other endurance athletes, so they might work for you too!

There are also three other bits in the Boston-based company’s inventory: RECOVERYbits, VITALITYbits and SKINNYbits. They are also all made out of algae but serve different purposes. If you’re interested in trying them out use the code BLOG at the checkout to get 10 percent off your purchase!

You can also find ENERGYbits on Twitter @ENERGYbits and on Facebook. Have you tried ENERGYbits? If so, let me know what you thought about them in the comments section below!

DISCLAIMER: ENERGYbits sent me a complimentary sample to review. I did not receive compensation for the review and they were not guaranteed a positive review. All opinions are my own.

10 thoughts on “ENERGYbits review for runners”