Another week has flown by in training and for the most part it was pretty great. I say for the most part because my long run was definitely not my best but I’ll get to that later. Week six started on Monday and according to my training program it was a rest day so I decided to do some strength training for my core and arms. I did a 25-minute ab workout On Demand that kicked my butt! I couldn’t believe it because I consider myself to have pretty strong abs but I was sore for at least three days (but I kinda liked it). I also did some arm exercises which I’m hoping to post soon.

Tuesday I went to the gym to do a quick 4-mile run and more strength-training. I was so excited to have my sister come along as my gym buddy! She has always been an athlete but said I’ve inspired her to workout more which I was really happy about. After my run (and her cycling) we did some floor exercises to strengthen our quads and some more arm and ab workouts.

Wednesday I went into Boston to a track near Fenway to do an interval workout with my cousin. We ran nearly two miles to the track and then did 4×400-meter sprints with a cool down run. It was a pretty great run besides the heat which was a killer. I am definitely noticing a difference in my mile times because of the tempo runs. If you haven’t started doing them I’d really suggest you start because you’ll notice a HUGE difference in your times. Check out a post I wrote a awhile back about how to run a tempo run with variations if you need some tips! 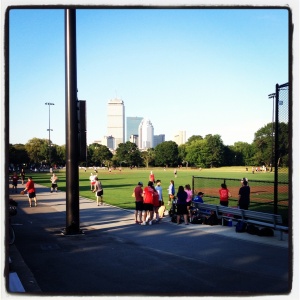 Beautiful view of Boston from the track!

Friday was a rest day so I decided to wake up early still and do a power yoga session on Lululemon’s YouTube channel. It felt great to do the stretches and hold the poses after running the three days before. I have also found yoga to be helpful in my breathing while running.

Saturday I woke up at 7:30 a.m. to go for my long run for the week. According to my training program I only had to run 8 miles, which, compared to last week, felt like it would be nothing. However, the temperature at 8:15 a.m. was already in the low 80s and so humid so I was relegated to doing my run on the treadmill at the gym. Basically, everything that could go wrong went wrong. My headphones got tangled in my necklace causing me to stop to get it all untangled. My knee didn’t feel great the whole time so I took it easy. Most of all I just didn’t feel good at all, my stomach was acting up and it was just terrible. I made it to 8 miles which is all that matters but I was pretty disappointed with the run.

Sunday was another rest day but I decided to do a recovery yoga session on Lululemon’s YouTube channel. This was really good because my legs were still pretty tight from the day before. Also, all week I’ve stuck to my Plank A Day Challenge which has been great!

Although my long run for this week didn’t go as planned I think the rest of my week went pretty well. I’ve been lucky to not have any hiccups in my training so far (knock on wood) so one bad run isn’t a big deal. I’ve decided to fuel my disappointment in that run to getting better this week and I’m taking that energy to prepare myself for a 12-mile run on Saturday. I hope everyone else’s training is going well so far. Keep me updated and run happy!