I’ve been relentlessly moving forward with my running for a little over a year now and have hit some major milestones, no pun intended (ok, just kidding, pun intended). Within a year’s time I:

–       Four months after that second half, I ran my first full marathon

Ok, so I’ve become a tad bit addicted to distance running. I went from couch-to-5K-to-half-marathon-to-marathon, in a year. But is that really progress?

I’m a firm believer that anyone can become a runner. I don’t care if you’re overweight, a couch potato, or just a stubborn person like I used to be who would always say, “I hate running.” Everyone has the potential to become a runner. But can everyone make progress and become a good runner? A fast runner? An elite? I don’t know.

I think progress takes a lot of time, hard work, dedication, and above all else patience. In the year that I’ve been running, I’ve seen progress in my paces and average finishing times.

But I’ll be the first to admit I lack patience. I want results now. So since I completed my first marathon at Big Sur in April, I’ve been focusing on making strides with my progress (again, pun intended, sorry I can’t help it). I’ve taken to doing interval workouts every Wednesday to work on my speed. I’ve committed myself to strength training by doing circuit workouts, lifting, and really focusing on my core. I’ve also tried to maintain a 22-25 average weekly mileage, although I’m in between training cycles. I’ve continued to run five days a week.

All of this will help me to continue my relentless forward movement, a.k.a progress. But will it all work the way I’m hoping it will? Who knows. What am I even hoping to achieve? I still don’t know that either. All I know is I want running faster for longer to feel easier. I know everyone wants that but I’ve seen my progress over the past year and I’m just hoping it’ll continue.

What I do know is that it is possible to get better. I look at some of my fellow running bloggers like Ashley who ran her first marathon at a finishing time very similar to mine and is now, just a few years later, chasing down a BQ (Boston qualifying time). I look to Lora, who ran her first marathon in 2011 and has continued to PR since, despite battling through a stress fracture. Both of these runners, and countless others, inspire me and make me truly believe progress in running is possible. It may be tough but the relentless forward motion will pay off. I just need to stop being so impatient.

How do you measure progress? Let me know in the comments below!

As with life, it’s easy to compare ourselves to other people and other runners. I’ve been thinking about this a lot lately because I’m starting to get better at running but my progress isn’t happening as fast as I’d like (I’m also pretty stubborn and impatient so that doesn’t help). But when I start to compare myself to other runners I have to remind myself to take a step back and remember I’m still a very new runner. Most of the runners I’m surrounded by on a daily basis are very experienced and have been running for much longer than I have, some have been running longer than I’ve been alive. So when the comparisons start to boil up in my mind I need to remember to focus on my own path, my own running, my own journey. We all start our journeys at different points. We can learn from each other but comparison is a waste of time. Run your own path. Happy running this week! 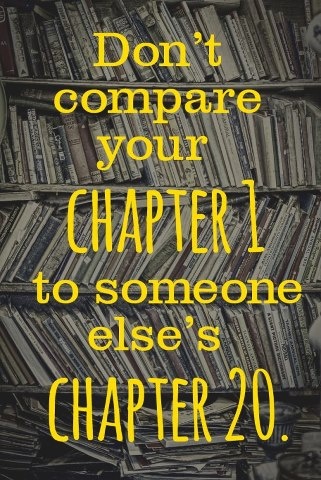