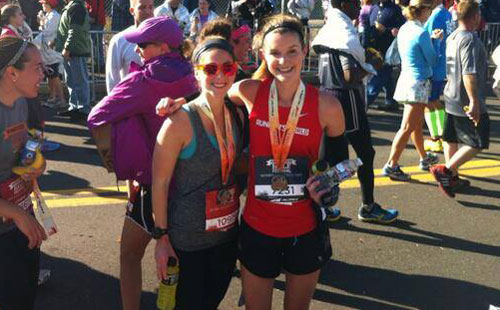 Last weekend I ran my third half marathon at our very own Runner’s World Half & Fesitval in Bethlehem, PA. I had zero plan going into race day other than using the 13.1 miles as a final long run heading into Marine Corps Marathon week.

When I say I had zero plan, what I really mean is my plan was to keep it easy. It’s really hard to do that though in a race. Had I been out on my normal training run, keeping it easy is no problem, enjoyable even. But in a race, with people to pass and pacers to keep behind you, it’s tough. Add a Runner’s World singlet to that and it feels impossible.

Luckily, I was able to hook up with Ashley before the start and we had talked about running together. She also wanted to take it easy since she was on her final race of the Hat Trick (5K, 10K, and half) so we ran the entire thing together.

We stopped a few times to walk and took a pee break. Ashley got some speed work in when she chased after a guy who made fun of us for walking, saying “it might as well be called Walker’s World.” But other than that, I thought the half was really enjoyable.

The course is tough, there’s no doubt about that, but it’s impossible to find an “easy, flat” course in the Lehigh Valley. It’s a valley. There are hills. But hills definitely make you stronger and running up and down them gave me the confidence boost I needed going into MCM.

One thing I took away though is that I really do like the half marathon distance. Like I said before, this was only my third half so I don’t have a ton of experience with them but I really think it could be a good starting point for me to start focusing on speed. It’s a manageable enough amount of miles to be able to come up with a solid race plan- I’m definitely not there yet with the marathon. But with a half, I can focus on my speed without dealing with the breakdown that comes with the territory of training for a marathon.

I’m feeling good going into Marine Corps but I think I need a break after. Running at the RW Half this weekend really made me realize I should try to focus on gaining speed after MCM to PR in the half which will eventually help me get better at marathons so I can one day reach my “dream big” goal.

Did you ever have to re-assess your running plans to focus on a larger goal?